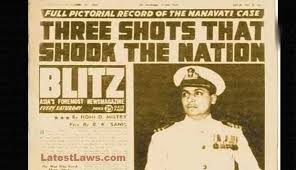 Title of case: K.M. Nanavati Vs. State of Maharashtra

Parties to the case

Facts of the case:

Appellant Kawas Manekshaw Nanavati is an Indian naval commander on charges of killing Prem Ahuja, who died in accordance with Section 302 and 304 of IPC Part 1. When the appellant left his job, his wife, Silvia, had an illegal relationship with Nanavati’s friend, Ahuja.

On April 27, 1959, Nanavati returned from sailing. When he returned home, his wife was acting strangely, reacting to him, or not being kind. He admitted that Sylvia had an affair with Ahuja. That night, Nanavati met Sylvia (wife) and their two children with Ahuja at the cinema. He first boarded the ship and received a false excuse to collect pistols and six bullets from the store to complete his official mission and continue to the Prem Ahuja office. Where he was not found, he went to Ahuja’s house and found Ahuja. A verbal confrontation broke out between the two. After the confrontation, a dispute broke out, three guns were fired, and Prem Ahuja died. Nanavati went straight to the western naval commander to confess and later handed himself over to the wealthy police.

The jury did not believe that he was murdered and favoured by a session judge and transferred the case to the High Court of Mumbai. The Mumbai High Court rejected the jury’s decision and convicted Nanavati in accordance with sections 302 and 304 of IPC Part 1.

Nanavati appealed to the Supreme Court.

The question of this case will determine whether Nanawati shot Ahuja in the “Heat of movement” or whether this was a deliberate murder, Nanawati’s beliefs.

Nanavati’s lawyers heard Silvia’s confession after that Nanavati wanted to commit suicide, but Silvia claimed she could calm him down. Silvia did not say whether Ahuja wants to marry her, and she plans to find out. So, he wanted to take medicine for a sick dog, so he got his wife and two children off the cinema and boated. He told the ship authorities that he wanted to pull revolvers and six bullets from the spacecraft when driving alone to Ahmed Nagar at night. After receiving the revolver and six cartridges, put them in a brown envelope. He drove the car to Ahuja’s office but could not find it. He drove to Ahuja’s apartment with the door open and walked into Ahuja’s bedroom and into the bedroom.

He also carried an envelope with a revolver. The accused saw the deceased call him a dirty pig in the bedroom and asked if she would marry Sylvia and take care of the children. Going criticized, “Do you want to marry all the women who are sleeping with me?” The accused was very angry and threatened to kill the dead by putting an envelope and a revolver in a nearby cabinet. The deceased suddenly took action, grabbed the envelope, and the defendant said to take out the revolver and come back. There was a fight between the two, and in that fight, two shots accidentally fell and killed Ahuja. After the shooting, the defendant returned to his car and went to the police station to surrender. Therefore, the accusations against the dead were made with serious and sudden provocations, so even if you committed a crime, it was not a murder, but a culpable homicide not amounting to murder.

The first claim raised is that Ahuja came out of the shower with a towel. When his body was found, his towel was still intact. It does not come loose or fall off, and is extremely rare when shuffle occurs. Also, after Sylvia’s confession, Nanavati calmed them down, gathered them, brought them to the cinema, put them in the cinema, then went to his store to retrieve the pistol. This shows that he has enough time to calm down, the provocation is not serious or sudden, and that Nanavati planned the murder. In addition, according to Ahuja’s testimony to the servant, Anjani, who was at home during the incident, was a natural witness, a total of four shots were made in succession, and the entire incident took less than a minute, excluding attacks. Nanavati came out of Ahuja’s mansion and did not explain to his sister Mamie that his sister Mamie was in another room in the apartment. The deputy director testified that Nanavati did not feel dizzy by acknowledging that Nanavati had shot Ahuja and even correcting the spelling of his name in the police records.

The Supreme Court ruled that the case was an apparently scheduled murder, agreed to a high court ruling, and sentenced to life imprisonment for the punishable murders that constituted the murder.

1 thought on “Case Summary: K.M. Nanavati Vs. State of Maharashtra”