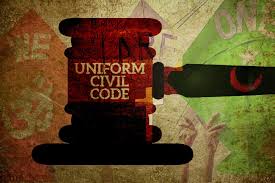 Uniform Civil Code would put in place a set of laws to govern personal matters of all citizens irrespective of religion is perhaps the need of the hour. Uniform civil code drag us towards “One country and One rule” that means just like all other laws like criminal law, Indian contract act and so on, there should uniformity in Civil Code. Its main aim is to replace the personal laws which are basically based upon the religious scriptures and customs in India with a common set of rules governing every citizen. Personal laws are distinguished from public laws and cover marriage, divorce, adoption, inheritance and maintenance which are different in different community.

Since May, 2019 four petitions have been filed in Delhi High Court seeking a direction to the center to frame UCC i.e. Uniform Civil Code. First plea among these four was filed by BJP leader and lawyer Ashwini Kumar Upadhyay, the HC had on 31st May issued notice to the centre seeking its response within four weeks. However the central government is yet to file its response in the matter. Among those petitioners one has been filed by Firz Bakht Ahmed, the chancellor of Maulana Azad National Urdu University and another was filed by Amber Zaidi who claims to be a social activist and also is a media personality. All the four petitioners want government to have judicial commission to draft the UCC within the time period of three months.

Why is it in discussion?

The bill of uniform civil code has been introduced two times as private member bill in past few months past few months in Rajya Sabha, but opposition urged chairman to block it.

The proposal of UCC was being made at the time of India’s constitution was drafted. Under Article 44 Directive Principles of State Policy states that the state shall endeavor to secure for the citizens a Uniform Civil Code throughout the territory of India. However it was not adopted by the constituent assembly as there was a lack of consensus that on what a potential a UCC would entail.

Why UCC has not been implemented yet?

The debate of constituent assembly reveal that some of its member wanted the UCC to exist parallel to personal laws i.e. no harm should be there to personal laws and on the other hand the discussion was that personal laws should be replaced by UCC but remaining others said that UCC would be a bad idea and will curb our religious freedom.

But the idea of UCC was not completely scraped and it was decided that India would continue its discussion on UCC and when the time is right and the country is ready a Uniform Civil Code should be brought in place with full consensus.

In this case in 1985, Shah Bano moved to Supreme Court for seeking maintenance under section 125 of the Code of Criminal Procedure when her husband divorced her after 40 years of marriage by giving triple talaq and denied her regular maintenance. The SC gave finding in favor of Shah Bano by applying section 125 of Indian Criminal Code and it is applied to all citizens irrespective of religion. Then Chief Justice, Y.V Chandrachud, observed that a Common Civil Code would facilitate the cause of national integration by removing disparate loyalties to law. And so, the court directed Parliament to frame a UCC. However Rajiv Gandhi Government wasn’t satisfied from the court decision; rather than supporting it the government enacted the Muslim Women (Protection of Rights on Divorce) Act, 1986 to nullify the SC judgment in Shah Bano Case and let the Muslim Personal Law prevails in divorce matter.

This is the second instance within which the Supreme Court once more directed the government under Article 44. In this case, the question was whether a Hindu husband, married under the Hindu law, by embracing Islam can solemnize second marriage. The SC held that adopting Islam for a second marriage is an abuse of Personal laws. Further said that Hindu marriage can be dissolved under Hindu Marriage Act, 1955 i.e. mere by converting itself in to Islam and marry again doesn’t dissolve the marriage under Hindu Marriage Law and therefore will be an offence under Section 494[5] of the Indian Penal Code.

Goa has already managed to enforce UCC within its jurisdiction. It is the sole state which has a common civil code called Portuguese civil code 1867, whereby:

Uniform Civil Code seeks to replace personal laws based on the scriptures and customs of each major religious community in India with a common set of rules governing every citizen. Due to diversity in India it is somewhere tough to come up with a common and uniform set of rules however our Government is trying to come up with common rules, but to bring it up is a sensitive and tough task but not impossible.

2 thoughts on “Is Uniform Civil Code need of the hour?”