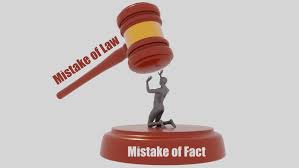 Generally, a mistake of fact refers to a mistaken understanding by someone as to facts of a situation the mistake results in the person committing an illegal act. Mistake of the fact can be used as a defense and is excusable, but mistake has to he reasonable and honest.
Illustration
X , used to get her Pomeranian dog to walk every morning. One morning, while talking on the phone with her friend X lost hold of her dog. While looking for her dog, she found another dog of the same breed, assuming it to be her own dog, she took it home. While later she noticed that, the mark her dog had was not there and she mistakenly took another’s dog. Here,X will not be liable because it was a mistake of facts.
At the same time, the mistake of fact can not be used as a defence when it has been done knowingly, despite knowledge.

A visited B’s house with two boxes of sweets, giving it to B, A specifically mentioned, that blue box is for him, whereas the red one is for C, his elder son. Afterward, B consumed both boxes of sweets, here B can not take the defence of mistake of fact stating that as both boxes were handed over to him, he assumed it to be his only. As, at the time of delivering the sweets itself, the conditions were specifically mentioned.
In the case of Morrison V. Ritchie & Co., a statement was published by the defendant that the plaintiff had given birth to twins, even if the defendant had done it in good faith, he was held liable, on the ground that the plaintiff was married 2 months ago only and the defendant was held liable for the offense of defamation and element of good faith was held immaterial.

Ignorantia Juris neminem excusat,i.e. ignorance of the law is no excuse.
The mistake of law is the legal principle which refers to one or more mistakes made by an individual in understanding applicability of law applied to their past activities which are under analysis by the court.

Mr.S at crossing did not stop his car at a red signal. Traffic police charged him for breaking the traffic rules, here Mr. S can not plead that he was not aware of the law.
In general, the mistake of law can not be taken as a defence and is not excusable because it is assumed that other than minor, lunatics and insane know the law of the country, where he/she resides but to some extent acting in good faith, can be the exception for the same.
The mistake of law can be used as a defense in following four circumstances :
• When the law has not been published;
• When the defendant relied on up a law or statute that was later overturned or deemed unconstitutional
• If the defendant relied upon a judgment that was overruled later; or
• When the defendant relied upon an interpretation by an applicable official.
The maxim that ignorance of the law is no excuse for breaking it, has been developed from the ancient Roman Law. In the good old days, where the number of laws were less and were numbered, it was easy to remember and understand them, and it was justified that one should know all the laws.
In the time, where all our actions are regulated by law, if the mistake of law is allowed to be taken as the defence, everyone will start pleading the same and this will lead to the end of the purpose of justice. But there is more to it, we have so many forms of law, and most of the Judgment delivered is in either English or Hindi language, what if a person knows neither English or Hindi? Also, there is overruling of judgments of one court by other higher court. Sometimes apex court overruling its own judgment. In such cases, how a layman is supposed to know the laws and keep himself updated with the same.
Likewise, Article 35A of our Constitution was unknown to everyone except for the last year or so. One can’t find the Article printed in any of the Bare Acts of the Constitution or in the latest textbooks written by famous authors. Article 35A was added by the Constitution (Application to J&K) Order, 1954, by President of India on May 14, 1954, exercising the powers conferred by Article 370(1) of the Constitution and with the concurrence of the government of J&K. The absence of this article in statute books is proof of its non-publicity and non-promulgation.
Also, in Martindale v Falkner, it was observed: “there is no presumption in this country that every person knows the law and it would be contrary to common sense and reasons if it was so.”
As per section 21 of the Indian Contract Act,1872, the validity of the contract is not affected by the mistake of law and does not make the contract voidable on the same ground.

Mistake of fact can be used as a defense to escape the liabilities by taking the plea of no mensrea as it is one of the essential; it must have to be truthful, reasonable and authentic in nature. On the other hand, the Mistake of law is no excuse, keeping in mind its consequences and the responsibility falling on individuals to know the laws except minors, lunatics, and insane. However, there are few rare exceptions to this rule which gives exemptions from the liability arising out of Mistake of Law.

1 thought on “MISTAKE OF FACT AND MISTAKE OF LAW”