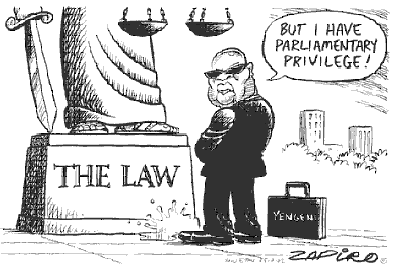 Parliamentary privilege enables parliaments “to perform their functions as representative institutions, in creating effective legislation and in scrutinizing government activity”. “As being exception to the ordinary law of the land”. Parliamentary privileges consist of “freedom of speech and debate, freedom from arrest, exclusive cognizance of the Houses, and the power of Houses to punish contempt etc.” Immunities granted to individual members acting in course of parliamentary proceedings work as shields that “allow parliamentarians to perform their duties without fear of intimidation or constraint”.
As the subject of parliamentary privilege itself is vast and complicated in “law and practice” various concerns and conflicts have arisen over the centuries on the same, e.g., “sub judice matters, search warrants and subpoenas, the power of Houses to punish for contempts, citizen’s right of reply, immunity of non-members and the scope of freedom of speech have on numerous circumstances brought legislative bodies and its members in divergence with constituents and the executive branch of government”.
Parliamentary privilege along with the possibilities for its abuse and misuse as has been a contentious issue as well the other issues such as: whether citizens should be allowed a right of reply; whether the privilege of freedom of speech in the proceedings of parliament needs to be qualified rather than to remain absolute; and, whether privilege allows persons to be unfairly defamed etc.
G. Griffith puts an observation that: “Recent cases on parliamentary privilege may not point in any discernible direction or reveal any definite trend, turning as most of them do on the particular facts at issue”.
An effective separation of power between legislatures, judiciary and executive has proven the effective solution for avoiding or at the most lessening friction, issues and conflicts between various rights and powers conferred specially on these branches. Still “years of evolving statutory and procedural structure with respect to privilege have still left many unreliability and grey areas as to the role each section of government is planned to perform”.
The controversial issues and challenges of the subject of parliamentary privileges under Constitution of India are discussed underneath.

Collison of the concept “parliamentary privilege” and Rule of Law

See also  Equality before Law - Article 14 of Constitution of India

The scope and extent of privileges, rights and immunities granted to parliamentarians is always a debatable issue all over the world. The special status given to parliamentarians as compared to common civilians or public has a potential to be controversial not only with the public but also with the other executive side of the government. “There have been concerns about the scope and extent of parliamentary privileges, whether these privileges should be qualified or absolute, whether members should be immune from suit or prosecution under the laws of defamation.”
In United States of America, United Kingdom and Australia “issues have been raised with regard to the abilities of the judiciary and law enforcement officials to carry out their duties regarding the privileges of parliament, such as in the execution of search warrants, the issuing of judicial writ and orders for discovery”.
The privileges of legislative bodies’ conflict with the powers conferred on executive government, the powers which are called executive privileges. Executive privileges contain certain rights “to withhold information when such disclosure of confidential communications would adversely affect the operations or procedures of the executive branch”.
In United Kingdom and Australia “executive privilege” is named as “crown privilege”; in the United States of America it is referred as “public interest immunity”
While exercising privilege executive sometimes “refuse to disclose certain documents (in protecting the operations of government)” which creates friction between legislative bodies and the executive which “can impede the ability of parliaments to scrutinize the operations of the executive”.
Thomas Erskine May has noted that in 17th century a committee of House of Commons has observed that: “[T]he privilege granted to parliament in regard of public service must not be used for the danger of the commonwealth”.