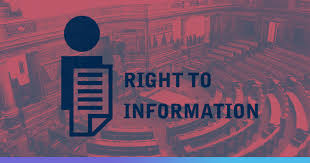 The RTI Act , 2005 allows public authorities to make disclosures on different aspects of their structure and operation. This includes: (i) disclosure of their organisation, functions and structure, (ii) powers and duties of their officers and employees, and (iii) financial information. The purpose of these suo moto disclosures is that such information should be accessed by the public with minimal recourse through the Act. When this information is not made available, people have the right to ask the Authorities for it. This can involve information under the control of the public authority in the form of papers, archives, or electronic records. The aim behind the act ‘s enactment is to encourage openness and accountability in the work of public authorities.

Minister of State for Personnel, Public Grievances and Pensions, Mr. Jitendra Singh, introduced the Right to Information (Amendment) Bill, 2019 in Lok Sabha on July 19 , 2019 and passed on July 22, 2019.It was passed by Rajya Sabha on July 25, 2019. It seeks modifications to the Right to Information Act, 2005.
RTI Act is one of the instruments that has motivated Indian people. It is one of independent India’s most effective laws in empowering common citizens and taking people’s trust in challenging government authorities and machinery. This act is aimed at the government’s accountability and citizen-centered approach. It also serves as a motivating factor for government officials and administrators that they cannot unilaterally behave and operate and therefore maintain the system of checks and balances in place.
Recently, India’s Supreme Court, in Anjali Bhardwaj & Ors’ case. Versus UOI contended that the RTI Act was enacted not only for sub-service purposes but also to ensure freedom of speech. Good governance, which is an essential component of any vibrant democracy, can be achieved if proper implementation of the act is achieved. Effective governance is also one of the constitution’s dreams. It also has a vital relation to the nation’s development.

The proposed reform bill also eliminates the requirement that their wages would be reduced by an amount equal to the pension if appointed, if CIC and ICs earn the pension or any other retirement benefits from the previous government service.

Negative aspects of the bill:

1. It will give the center greater powers, because the government determines everything. This will cripple the neutrality of information commissioners and make the government “More Obedient” information commissioners. They must act like government employees and will decide to withhold information that will help the government if they so wish.
2. The original act had specified tenure terms, salaries, appointment, etc. The amendment is seen as the tenure, salaries, appointment that the government will decide on a case-by – case basis.
3. The proposed amendment diminishes the status of the CIC, SCIC and IC from that of the Judge of the Supreme Court, thus reducing their authority to issue the directives to senior officials of the government.
4. The proposed amendment would adversely affect the independence of CIC, SCIC and ICs as the Center will now have the authority to decide these officials’ tenure, terms and salaries. This is, then, a threat to independence.
5. The proposed bill was introduced and passed without the public consultation that hinders the right to knowledge of people as a public consultation is necessary for legislation to succeed and the drafting of the law can not be left to the elected officials alone.
6. On issues such as NPAs, demonetisation, RBI, etc., the information commission has revealed significant information to the government – something it can only do if it has both authority and independence.
7. This amendment would eliminate the accountability because it will allow the central government to determine arbitrarily which will fundamentally undermine the entire fundamental concept and structure of the RTI.

1. The government claims that these amendments flaw the equivalence drawn between India’s Election Commission and the Central & State Information Commissars. It seeks to streamline and strengthen the Act, and also to bring greater transparency.
2. The Indian Election Commission is a legislative body constituted pursuant to Article 324 of the Indian Constitution, while the Central and State Information Commissioners are the statutory bodies constituted pursuant to the provisions of the RTI Act , 2005. Its status therefore needs to be rationalized accordingly.
3. CIC has been granted equal status as the Supreme Court Judge, but the CIC ‘s decisions can be challenged in the High Courts.
4. These modifications are carried in to improve the overall RTI structure.

This amendment bill , 2019, is undermining the key aim of the RTI Act , 2005 which was to encourage transparency, accountability in the functioning of every public body and the right of people to secure access to information. This is an effort to take away the free flow of impartial information and put the information filtered by the public authorities before the general public in order to appease the government. The government has weakened the sunshine law without giving any credible rationale for bringing about an amendment as this will definitely hamper the information commissioners’ independent work. They are no longer in charge of independence, transparency, status and authority, but will now work as one of the departments ultimately accountable to the central government.