Confessions to the Police & their Admissibility SECTION 25, INDIAN EVIDENCE ACT, 1872 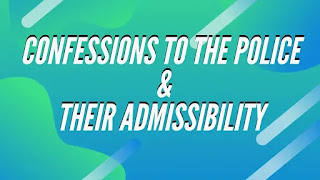 One of the most instrumental provisions in the evidence act, section 25 talks about the admissibility of a confession made to a police officer. This section has been through a lot of clarifications due to its ambiguous nature and the fact that the term ‘police officer’ has not been elucidated enough nor any definition has been provided by the Act. The very first case wherein the actual intention of this section was explained was the Hurribole Case[1]where the position of Deputy Commissioner of Police was clarified and held to  be within the ambit of the term ‘police officer’. The Court spoke about the intentions of the section and adopted a vision where the term would be seen in a functional way rather than focusing on the technicalities of the posts and positions within the system. The purpose of this section was to make sure that no accused is subject to any coercion or influence where the police can conveniently extort confessions through any means they can. This section has had a tiring journey with the courts concurring and contradicting its intention and ambit since its inception.