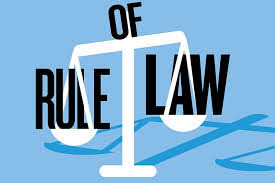 Rule of Law: An Overview

The concept “Rule of Law” is derives from the French expression ‘La Principe de Legalite’ which refers to a government founded on principles of law and justice as opposed to the ruler’s arbitrariness.  In its most fundamental sense, the concept of Rule of Law is the foundation upon which modern democratic society is founded and seeks to establish. The Rule of Law principle applies in a state governed by laws and not by the men’s arbitrary actions. The Rule of Law is a key component in a collection of items that constitutes contemporary political ideals; other things in this list include democracy, civil rights, and the principles of the free-market economy.

The constitution of a country is the ultimate law—it’s the basis of all political power, legislative, executive or judicial power. It is the law that sets out governing and management of power in governmental institutions. Apart from the inter-institutional dynamics, a modern democratic constitution has another important role to play—to provide fundamental guarantees and freedoms for every individual or community to live with dignity.

Despite being the lengthiest in the world, the Indian Constitution makers have ensured that due to their specificity its flexibility is not affected. Its versatility is evident from the constitutional practice of the last 68 years and in particular, from the way the Supreme Court interpreted it to suit the needs of the times and by breathing life into it. There are also special provisions to enforce rule of law and constitutional mandate, viz. due process of law; public interest litigation; and the treatment of women, juveniles, senior citizens and mentally challenged persons.

Rule of Law under the Indian Constitution

In India, the Rule of law concept can be traced back to the Upanishads. In modern times, the Indian Constitution scheme is based on the principle of rule of law. The Constitution framers were well acquainted with the postulates of rule of law as proposed by Dicey and as revised in its relation to British India. It was however, in the fitness of things that the founding fathers of the Constitution gave due recognition to the concept of rule of law.

The theory of Rule of Law as enunciated by Dicey has been accepted and integrated very succinctly into the Constitution of Indian. The Constitution value viz; justice, democracy and equality are enshrined in the Preamble itself (which is part of the Constitution).

India’s Constitution of has been made the supreme law and all law shall adhere to it. Any legislation found to be in breach of any clause of the Constitution, especially, constitutional rights, shall be deemed invalid. The Indian Constitution also follows the concept of equality before law and fair protection under Article 14 laws enumerated by Dicey.

Article 21 also enshrined the very basic human right to life and personal liberty. Article 19(1) (a) of the Constitution of the India grants the third rule of the Rule of law (freedom of speech and Expression). No individual can be convicted of any crime except in the Indian Constitution for breach of a law in effect at the time of execution of the act charged as a crime is also very well recognized. The principles of double jeopardy and self-incrimination have also found its rightful place in the Constitution. Articles 14, 19 and 21 are so fundamental that they are sometimes referred to as the golden triangle Articles of the Indian Constitution.

The Constitution therefore ensures an independent, competent Judiciary to resolve conflicts and claims under Articles 32 and 226 for infringement of constitutional rights. In Union of India v. President, Madras Bar Association, the Supreme Court held that there are several facets to the Rule of Law, one of which is that citizens’ disputes of will be decided by the independent and impartial Judges, and that disputes concerning the legality of the Government acts will be decided by the independent Executive.

Justice R.S. Pathak of the Hon’ble Supreme Court has noted that it must be remembered that our entire constitutional system is based on the rule of law, and in any system designed in this way is impossible to conceive of legitimate power which is arbitrary in character and travels beyond the bounds of reason.

There are a number of instances where the principle of rule of law has been debated and came into light. Some of the instances are:

ADM Jabalpur v. Shivkant Shukla
This case is also referred as “Habeas Corpus case”. When it comes to rule of law it is one of the most significant cases. The question put before the hon’ble court was whether there was any rule of law in India other than Article 21 of the Indian Constitution. It was in context relating to the proclamation of emergency where the enforcement of Articles 14, 21 and 22 were suspended.

Som Raj v. State of Haryana
In this case it was argued that the lack of arbitrary power is the postulate of rule of law upon which the whole constitutional structure rests.

Union of India v. Raghubir Singh
In this case the court held that a considerable degree which governs people’s lives and regulates the State function flows from the superior court’s decision.

Chief Settlement Commissioner, Punjab v. Om Prakash
In this case, the Supreme Court that the core and most distinctive characteristic of our constitutional system is the principle of rule of law which implies, in the present sense, the authority of law courts to check all administrative acts through the standard of legality. If the aggrieved party notifies the case, the administrative or executive action that does not follow the norms will be set aside.

Keshavananda Bharti v. State of Kerala
In this case, the Supreme Court stated the concept of rule of law as one of the most important aspects of basic structural doctrine.

Gadakh Yashwantrao Kankarrao v. Balasaheb Vikhe Patil
In this incident, the reasoning laid down was “If the rule of law is to be maintained as the foundation of the constitution of which integrity of elections is a essential concomitant, it is the responsibility of the courts to appreciate the evidence and construe the law in such a way as to serve this higher purpose and not even to encourage imperceptibility the recognition, much less affirmance, of the falling electoral standards.

For democracy to endure, the rule of law must prevail, and the best possible men must be selected as people’s representatives for proper administration of the nation. This can be best achieved by men of high moral and ethical values who win the elections on a positive vote obtained on their own merit and not by the negative vote of process of elimination based on comparative demerits of the candidates.”

Thus it can be certainly deduced, on the basis of above mentioned facts that since its inception, the concept of Rule of Law has developed at a rapid pace owing to the dynamism inherent in the very concept itself. The development can be attributed to the various laws formed by the parliament and also by the several judicial pronouncements.

Through its decision, the Courts have endeavored to reinforce these mechanisms and to ensure effective justice delivery to all people. Issues such as faulty regulations and overcrowded courts are but minor hindrances and institutions such as the Law Commission of India strive to sort out these issues in order to create a framework in which there are no barriers to the smooth functioning of the Rule of Law.