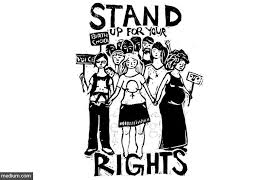 The woman is an adult version of a girl. Women are compared with different names in different areas like some has compared her to dew drops, tears, Goddess, nature and she is one of the preferred subjects for poets. But are they safe? Do they get equality? Do they face violence? The cruelty and crime against women are the major reason why the constitution seeks its more attention towards the weaker section of the society which also includes women. This is so because even though she might take her stand today but still she is the victim of violence, assault, harassment, rape and many more, but the law is always there to protect them.

In India, the constitutionally guaranteed equality for women is often contradictory to the harsh social reality of the land and its cultural norms. The struggle for women’s equality began in India in the 20th century, during the struggle for Independence. In the fight against the British, western-educated leaders like B.R. Ambedkar, Mahatma Gandhi, Raja Ram Mohan Roy and Savitribai Phule encouraged women to step away from their homes and hearths and enter the public sphere in the fight for Independence. Indian values, nationalism and cultural heritage were glorified through the symbolism of ‘Mother India’. Perhaps for the first time in India, the idea that a woman is part of the larger Indian tapestry as a legal citizen took root. The inclusion of the female citizen into the public sphere necessitated citizenship rights and changes in the law such as the right to education, inheritance rights, the abolition of sati and polygamy as well as an allowance for the widow- remarriage.

Have you ever imagine that what if these laws would discriminate against women, then where would she go?

You might be amazed after knowing the fact that law too discriminates women.

Can gender-based atrocities be agnostic of ethnicity and culture?

India has signed on International Human Rights Law, specifically on the convention of elimination of all forms of gender-based atrocities against women where all the countries have agreed that they will live up to certain international human rights standards, including legal equality for women. These principles do trump individual cultural concerns because they have agreed that gender equality is thoroughly important.

Even though the Hindu Succession Act, 1956 was amended in 2005 to give an equal share to daughters in inheritance, parts of the act remain discriminatory. If a Hindu woman dies without a will, her property goes to her husband’s heirs if there is no spouse or children. The law assumes that women become part of the husband’s family after marriage.

Section 498 of the Indian Penal Code, 1860 prescribes a punishment of up to two years for a man who has sexual intercourse with the wife of another man. There is no punishment for the woman. While the law may seem discriminatory towards men on the surface, it is highly derogatory to women. It assumes that women are not capable of making decisions on their own and the man must have seduced or enticed them.

3. The Hindu Minority and Guardianship Act, 1956

The law upholds father as the natural guardians of a Hindu, minor and after him comes the mother. This means the father is considered the natural guardian of a child, with respect to all legal decisions over a child’s life or even if you need to sign a document on behalf of the child the mother can’t do it by herself. There have been some cases which have been taken to court because a mother has done some investment on behalf of the child and the bank has refused the papers saying that the father has not signed.

Divorce laws in India are highly discriminatory. A Christian woman cannot divorce her husband on the grounds of adultery, but her husband can use adultery as a ground for divorce. Moreover, any divorced woman is not entitled to the property in the husband’s name accumulated during the marriage even if she contributed to acquiring it. She can only claim maintenance under Section 125 of the Code of Criminal Procedure.

Even in the 21st century, polygamy is lawful in certain sections of the society if their religious codes or customs dictate so. Goa Civil Code permits bigamy among Hindu men if the wife fails to deliver a child by the age of 25 or a male child by the age of 30.

In addition to these laws, numerous others treat women as a second-class citizen. Our laws do not even recognize marital rape to be a crime, most of the brunt of which is born by women. Consent for sexual intercourse is immaterial if two persons are married. In the last seven decades, we have failed to uphold the basic constitutional principle of equality before the law. It is time that we demand our representatives to respect the constitution and remove all forms of discrimination on the grounds of sex and gender.

The main idea is, to have gender equality in society, we need to have gender equality in the law also. As per the Prohibition of Child Marriage Act, 2006 the marriageable age for men in India is 21, while it is 18 years for women. This manifests the narrow mindset of our lawmakers who think that the wife must be younger than her husband. Even though some of the changes now have been brought but no woman is treated to be equal to that of the man.